LAS VEGAS, Jan. 12, 2012 –- LG Electronics (LG) revealed its home appliance business strategies for 2012 in a discussion with members of the media at the tail end of this year’s Consumer Electronics Show (CES). Moon-bum Shin, Executive Vice President and CEO of LG Home Appliance Company, announced that LG’s primary goal this year is to strengthen its business foundations so that it can achieve the top position in the home appliance category by 2014. In order to achieve the objective, LG plans to enhance its competitive advantage in the refrigerator and washing machine segments and make strong investments in smart appliances. Despite the global economic downturn, LG aims to achieve double digit sales growth rate this year.
“To accelerate our performance and growth amidst the global economic challenges, we will pursue value-oriented qualitative growth with a greater focus on products and businesses with higher profitability potential,” said Mr. Shin. “The competition is more intense but with a proactive investment strategy and progressive development of technologies with solid growth potential, we believe we can elevate the standards of the appliance market.”
On top of that, LG is pushing the boundaries of smart appliances with new and improved Smart ThinQ™ technology, offering enhanced convenience and smarter savings. The upgraded Smart Manager introduced at this year’s CES help consumers maintain their daily nutritional balance and greatly enhance convenience in the kitchen. LG’s unique Health Manager feature offers specific, nutritious meal plans and recipes of up to a week based on a family’s profile and medical conditions. Smart Shopping offers online grocery shopping directly from the refrigerator’s LCD panel, or by smartphone.
LG’s Smart Appliances, combined with the upgraded Smart ThinQ™ technology, will continue to position the company as the leader in consumer-oriented, ultra-convenient appliances. Followed by the successful introduction of four smart appliances in 2011, LG plans to gradually extend its lineup of smart appliances in the near future.
In addition, LG will continue to provide upgraded premium lines of the company’s representative energy-efficient yet large-capacity refrigerators equipped with LG’s Linear Compressor and washing machines equipped with the Inverter Direct Drive™ motor, raising the bar for the value-added products market. In 2012, LG aims to be the top selling washing machine brand in the globe for the fifth consecutive year, as it has done since 2008. Refrigerator production is expected to ten million units for the third consecutive year. Their overall productivity is expected to increase with continuous innovation.
And finally, having taken over the reins of LG’s HA business unit just one month ago, Mr. Shin feels strongly that LG’s success in history has been its ability to meet the diverse needs of consumers in different regional markets. In developed markets, LG will adhere to the energy standards of the North American, European and other developed markets by introducing washing machines equipped with the Inverter Direct Drive™ motor that consume less energy compared to conventional LG models. In emerging markets such as Central America, South America, Southeast Asia and CIS, LG will offer more specialized products that appeal to the specific demands of local consumers, such as refrigerators that operate in homes with uneven electricity supplies. 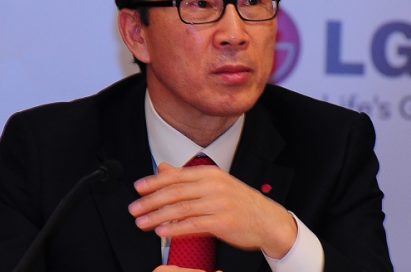