SEOUL, Aug. 12, 2020 — LG Electronics (LG) today announced the launch of its Life’s Good campaign to rediscover what makes life so special. Recognizing the vitality and creativity of the world’s youth generation, LG is providing a platform that gives a greater voice on the global stage today, International Youth Day.

In 1999, the United Nations designated August 12 International Youth Day to celebrate and encourage young peoples’ voices, actions and initiatives for meaningful, equitable engagement. In an increasingly polarized world with eroding trust in public institutions, International Youth Day is more important than ever in recognizing the importance of youth participation in political, economic and social life.

Officially kicking off today, the LG Life’s Good campaign embodies both collaboration and creation – two key elements of today’s young generation – with a short film on the LG Global YouTube channel (www.youtube.com/GlobalLG). The Life’s Good movie is the result of LG working closely with teen filmmaker Amelia Conway along with other young influencers whose aspirations are as diverse as their personalities.

“The message of this film and the larger campaign resonates with me, especially today when it’s important for people to remember what truly matters in life and makes it meaningful,” said Conway, the young director. “Coming from a generation that is so independent and creative, embracing our individuality and diversity is incredibly important for me and my peers.”

At slightly more than four minutes, the short film portrays young people in their elements as they engage in their passions such as photography, music, skating and environmental conservation, among others. Showing a willingness to raise their voices for meaningful causes, the movie illustrates the youth generation’s true resilience and creativity in the face of adversity during these unprecedented times. Due to the pandemic, the movie was directed remotely, self-filmed and collaboratively produced by LG and the teens.

“Our support of this campaign is to demonstrate that Life’s Good is more than just a slogan, it’s a lifestyle philosophy,” said Kim Jin-hong, head of LG’s Global Marketing Center. “On this International Youth Day, it’s important that today’s leaders make a commitment to engage tomorrow’s leaders at such a precipitous time.” 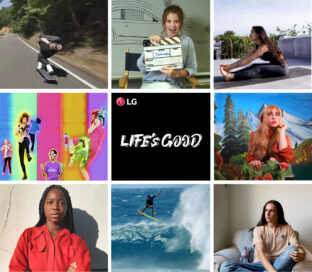