ASPIRING YOUNG ARTISTS MAKE BEAUTIFUL MUSIC TOGETHER WITH A LITTLE HELP FROM H.E.R.

The three winners of LG’s Life’s Good Music Project have released their collaborative song, created with guidance from Grammy Award-winning artist, H.E.R. The uplifting and inspirational song celebrates life and delivers a message of hope to the world during these difficult times.

Launched in August as part of LG’s Life’s Good campaign aimed at supporting and encouraging young voices, the Music Project drew over one thousand submissions from gifted musicians based in countries all over the globe. The contest also created significant buzz online and across social media, with related videos generating some 60 million views.

Winners Claire Ernst of Nashville, Tenn., Andrew Music Williams of Long Beach, Calif., and Jake Chapman of Los Angeles, Calif., won the chance to create a song coached by the acclaimed 23-year-old artist, H.E.R. During a series of virtual rehearsals, the youthful quartet shared their ideas and experiences, and used their collective talents as composers and performers to craft an inspirational new track with a universal message of positivity.

Unable to meet and collaborate in-person due to social distancing, the four quickly formed a strong bond, united by their passion for music and desire to encourage others through song. Even over video call, the excitement and energy were palpable, with the connection between the young performers obvious in the harmonies they created with their voices and instruments.

“Life may come with some obstacles, but don’t you give up,” they sing. “Just keep holding on, because I believe you will make it.” Just as the lyrics are uplifting, the new song itself is a soothing reminder to its listeners that life is still good, “living with the door wide open.”

“This campaign has given me motivation, hope and a desire to encourage the world one song at a time,” said Andrew Music Williams. “As a participant, I’ve realized the importance of believing wholeheartedly in the chances you take. As a winner, the response from H.E.R. along with the advice she gave me will forever be applied to my music career.”

“This experience with LG and H. E.R has been absolutely surreal and a dream come true,” echoed Claire Ernst. “I had a blast collaborating with the other artists and meeting the LG team. I’m incredibly honored to have been chosen for this one in a lifetime opportunity, life’s really good!”

“This campaign was so much fun! I had a great time making my entry, and I’m flattered that H.E.R. liked it so much that she chose me as one of the winners,” said Jake Chapman. “This is something I’ll never forget! Thanks LG and H.E.R.!”

“[The project] was a dope kind a thing to bring some joy to the musician world, I know that everybody else that participated in this had a great time doing it,” commented H.E.R., who acted as a mentor for the creation of the final song. “Everybody did a great job. Everybody made it their own.”

“We’re thrilled to release this fantastic song as a culmination of our global Life’s Good Music Project,” said Kim Jin-hong, head of LG global marketing. “The song by our three young winners guided by H.E.R. is full of strength and passion, and we’re awed by both the talent and determination they all possess.”

More information on the Life’s Good campaign can be found on the LG Global YouTube channel and Instagram page. Hear the Life’s Good Music Project song by Andrew, Claire and Jake, with guidance from H.E.R. here. 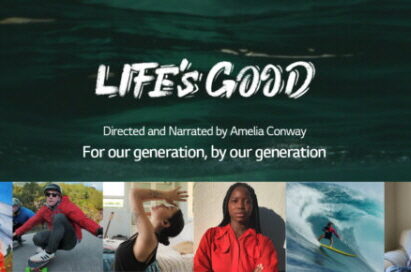